My blog is where I share detailed wedding and engagement stories on my journey as a wedding photographer. You'll also find blogs about great venues and planners to connect with and tips on how you can make your wedding day the BEST day possible.

home on the web

The peddler, Bonnie and the crew!

After learning more about the booming bachelorette party culture in here in Austin, Texas I decided to connect with Pubcrawler of Austin and photograph a pub crawl with a group of ladies from out of town. (More on why later) It was one of the coolest experiences I’ve ever had as a photographer and definitely something that’s on the top of my list of things I’ve done since living here. To say that Pubcrawler of Austin is something you have to do is definitely an understatement. Read on!

What is the Pubcrawler of Austin? As described on their website they are Austin’s original pedal-powered pubcrawl. But if I had to describe it I’d say that it’s one of the best ways for a group of up to 14 people to pedal, drink and laugh their way through the heart of downtown Austin, Texas. The process is pretty simple. When you show up, step one is to meet with your guide and after signing a quick waiver it’s time to hop on your peddler. On this particular day, our guide was a cool cat by the name of Bonnie. As he describes it, “Yes! Bonnie with a ‘B’ and yes, just like Bonnie and Clyde. Shit happens!” After being briefed on the rules and regulations of the peddler it was off to the races! Just in case you’re wondering, the answer is yes! You have to pedal or the vehicle won’t move. It’s very fitting that Pubcrawler of Austin has a simple motto…… Pedal Bitches! 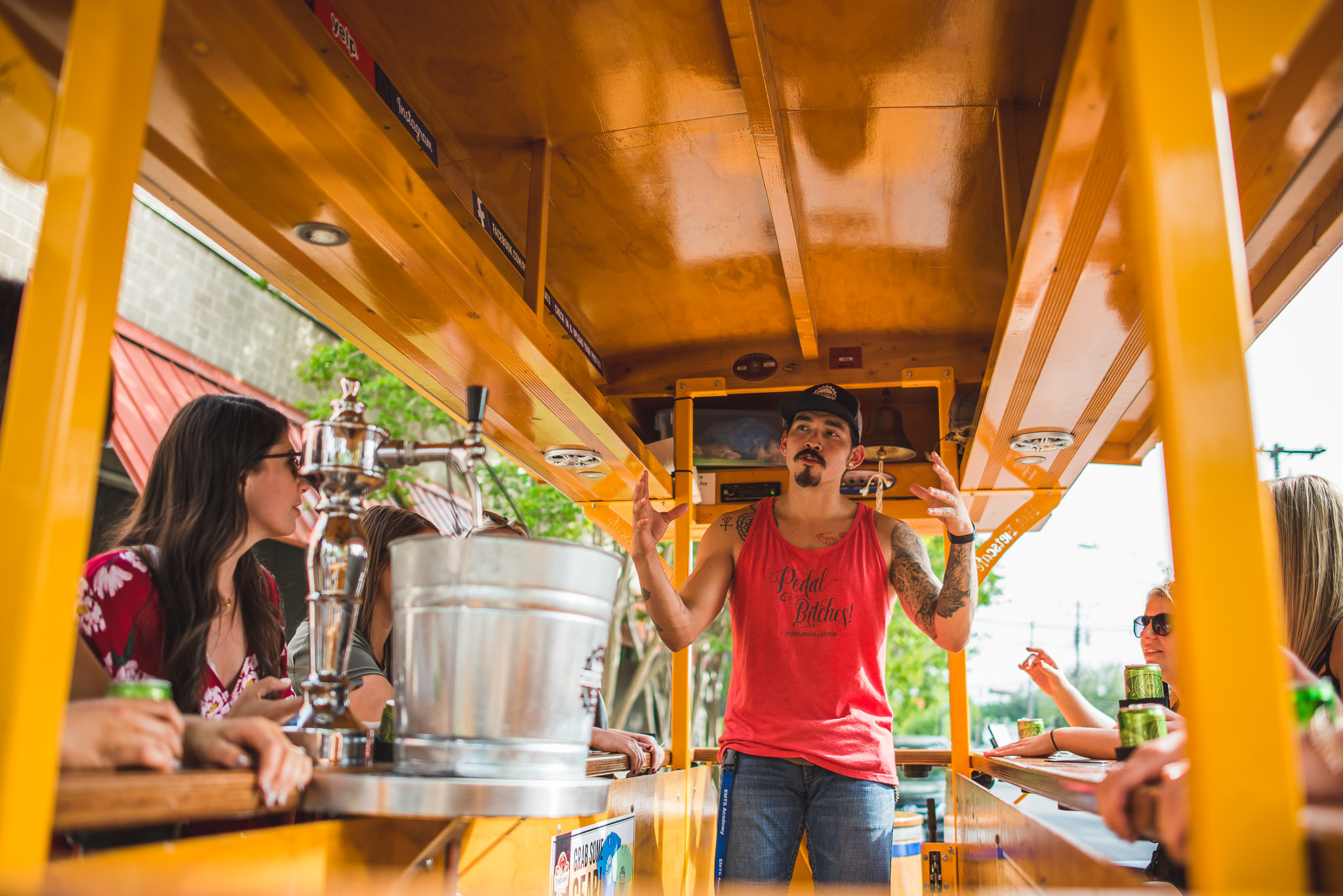 Bonnie with the breakdown. Did you see his shirt by the way?

The ladies were able to listen to any music they liked while on the peddler after Bonnie passed them the AUX cord (which is 100% clutch) and that set the stage for the entire time we were together. The pub crawl lasted about two hours as we made our way through Austin’s downtown grid, stopping to hop out and explore the various bars/pubs in the immediate area. This is great for anyone looking to find a fun and unique way to learn more about the bar scene or anyone who is flying in from out of town and wants to experience Austin in a ‘fast’ and furious way. We stopped at the Tiniest Bar in Texas, Hangar Lounge and The Bling Pig Pub before wrapping things up at a nice lounge called LUX. Tons of action! Tons of great moments!

The thing I enjoyed the most was how much everyone was able to let their hair down and just have fun. The music was blasting, the drinks were cold and at times it felt like we were in our own little world separate from everyone else. People were taking photos of us, interacting with us, whistling, honking their horns and making the experience even more enjoyable. As a photographer I had an amazing time and by the end of the day I felt like I was one of the crew instead of just the photo guy. I met the coolest group of ladies who flew in from different parts of the country and it was great getting to know them while capturing great moments as they experienced downtown Austin for the very first time.

If you’re looking for one of the best ways to experience downtown Austin while grabbing drinks with friends and family or if you’re planning a bachelorette party and you’re looking for something to do on a Saturday afternoon you absolutely need to get in touch with Pubcrawler of Austin. Tell Jennifer I sent you and be sure to let Bonnie know how cool his first name.

To learn more about the Pubcrawler of Austin and to book your peddler, click below. Tell Jennifer I sent you!

« 10 wedding planners you should know in Austin, Texas